How a single data strategy empowered Genomics England to sequence the future of British healthcare.

It was called one of the greatest feats of exploration in history. From its beginnings in 1993 to its completion in 2000, the project to map the human genome aimed to empower humanity for the first time to read the blueprint for how human beings are built.

Since the genome was finally mapped, organisations around the world have started to use that capability to improve how they provide healthcare to their citizens.

Take patients with rare diseases or cancers. In the past, they would endure long journeys to diagnose what was wrong with them and what they could treat it with. The approach was primarily based on trial and error, and the journey would often be unsuccessful. The result was a system that cost a significant amount of time and money for health services and provided mixed results for increasingly frustrated patients.

By sequencing the genomes of patients with these conditions, as well as their families, we can move toward a greater understanding both of diagnosis and treatment for people all around the world. 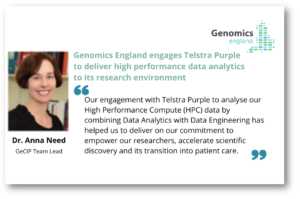 You can view the full article by Telstra on 2 Apr 2020 at: https://purple.telstra.com/case-studies/genomics-england-case-study

Any cookies that may not be particularly necessary for the website to function and is used specifically to collect user personal data via analytics, ads, other embedded contents are termed as non-necessary cookies. It is mandatory to procure user consent prior to running these cookies on your website.

Analytical cookies are used to understand how visitors interact with the website. These cookies help provide information on metrics the number of visitors, bounce rate, traffic source, etc.

Advertisement cookies are used to provide visitors with relevant ads and marketing campaigns. These cookies track visitors across websites and collect information to provide customized ads.

Performance cookies are used to understand and analyze the key performance indexes of the website which helps in delivering a better user experience for the visitors.